It is a well-known psychological phenomenon that the majority of traders make their buy decisions when they believe that the price has fallen too far, too fast. Conversely, they tend to sell a security if its price has risen too far, too fast. If this situation occurs it usually manifests itself through the increased number of order cancelations that occurs on either the Bid Side or the Ask Side of the Order Book.

By measuring the relative cancelation frequency of buy and sell orders it is possible to extract information about traders’ intentions to buy or sell a security. By using the Sliding Time Window concept applied to the different uncorrelated time frames Stealth Trader© measures this valuable aspect of traders’ sentiment. It’s called “The Trader’s Commitment”. This relative cancelation frequency is measured using a one-dimensional linear scale and the visual representation of the Traders’ Commitment is done by using a gauge-like linear indicator. The picture below shows the Traders’ Commitment Gauge that is one of the most important gauges in the Stealth Trader© cockpit. 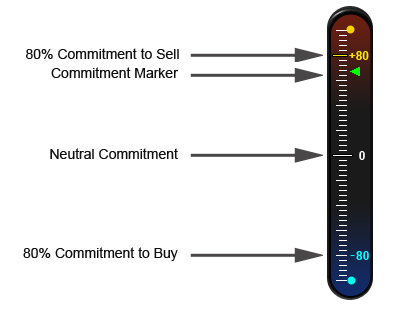 There are two clearly marked levels on this gauge that are + 80 and – 80. These levels represent situations when the overwhelming majority of the traders (over 80%) are committed to sell or buy the security.

If this happens, it could mean that the traders’ commitment to stick to their Sell orders is greater than to their Buy orders (i.e., possible anticipation of an upcoming price decline). If there is a higher number of cancellations that has been registered on the Ask side of the book (the green marker is in the bottom part of the gauge), a possible price increase may be forthcoming.

The closer to the top or to the bottom part of the gauge its marker is positioned, the greater the probability for the price to move in the direction of the exhibited traders’ commitment.

Can't find what you're looking for? Get in touch