This gauge contains a unique algorithm that calculates the fair or equilibrium price of the monitored security based on the analysis of the price fluctuations that are registered over a 5-minute sliding window.

Based on the assumption that all of the processed orders on the book should result in the price movement that fairly represents those filled orders (i.e., the market efficiency assumption), the gauge calculates the difference between the current actual price level and its fair value. This gives a trader insight on how far the efficiency state the market is from the currently observed levels. Therefore, it can enable the trader to make more accurate trading decisions. This difference is calculated in standard deviations and is displayed in the price levels that correspond to those deviations. 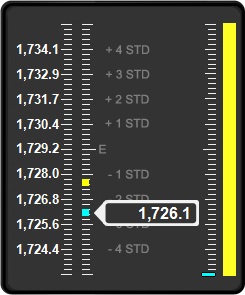 There is a price scale to the right of the price deviation levels that has a price scale with two markers (yellow and cyan colors). These markers indicate the highest and the lowest levels of the price registered over the current 5-minute sliding window. 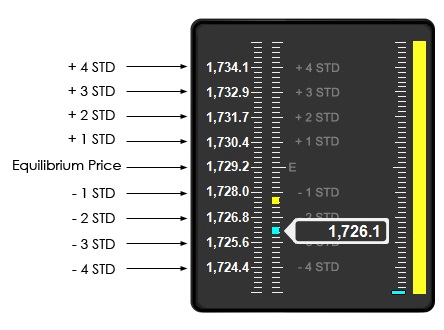 These help the trader assess the current price volatility levels in terms of standard deviations. 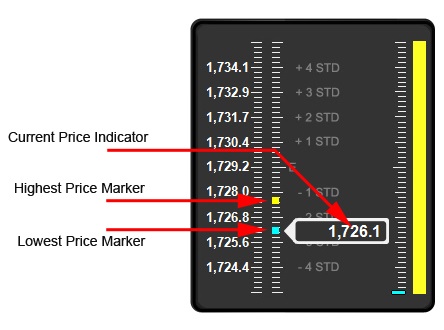 In the middle of the gauge is a white arrow that displays the most recent (i.e., last) traded price of the analyzed security. This arrow’s position points where the current price is in terms of standard deviations relative to the price equilibrium level. This information helps you understand how much the markets are overbought or oversold, which gives you additional information for your Buy and Sell decisions. 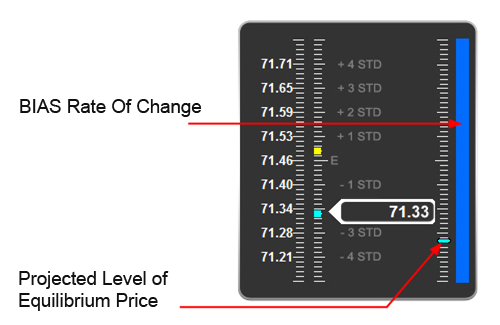 On the right side of the gauge are two indicators:

· A vertical bar that changes the color

· A small marker that slides over a vertical price scale.

The small marker indicates the projected equilibrium price compared to the current equilibrium value and normalized by its highest and the lowest values registered over the gauge 5-minute sliding time window. This information is very valuable as it allows the trader to anticipate the change in the market efficiency over the next 5-minute interval.

How to Use this Gauge

In order to understand and use this gauge effectively in your decision making, keep in mind that this a confirmation gauge and its position can only be used to supply an additional support to your decision to buy or sell a security.

Once you feel that the sentiment gauge is showing bullish or bearish sentiment and you feel that is enough to consider a trading action, you should verify your decision with the Traders Commitment Gauge first and then with this gauge.

If you decide to buy a security, you should confirm your decision by waiting for the Trading Equilibrium Gauge to be in a position similar to the one shown below. 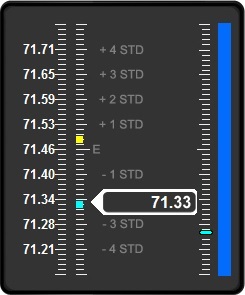 · The price of the security is almost at minus 2 standard deviations from its equilibrium level, suggesting that there is a possibility for the price to move up towards the equilibrium level.

· The price is near its lowest level registered within current 5-minute window (cyan dot).

· The BIAS bar is blue, which means that the increase in the projected equilibrium price might occur in the next five minutes.

All of these factors indicate that it is a good time to consider buying this security, provided that all the other gauges are in agreement with this decision.

The opposite situation from example 1 is illustrated below. 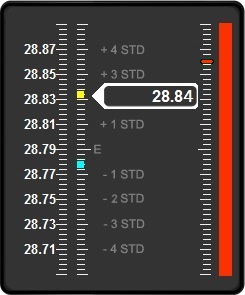 · The price is near its highest level registered within the current 5-minute window (yellow dot).

· The BIAS bar is red, which means that the decrease in the projected equilibrium price might occur in the next five minutes.

All of these indications suggest that it is a good time to consider selling this security, provided that all the other gauges are in agreement with this decision.

Can't find what you're looking for? Get in touch